by dailystatesman
in General News
0 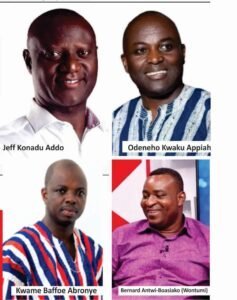 The governing New Patriotic Party(NPP) would, from today May 27, to Sunday, May 29, elect its regional leaders across the country. Analysts believe the election will be hotly contested in the Ashanti and Eastern regions, both strongholds of the party. Legal practitioner and leading member of the party, Gabby Asare Otchere-Darko, had said in a social media post that “all eyes are mainly on the chairmanship race in the Ashanti and Eastern Regions. The contests in these two big regions are the hottest. Western Region is the one place where the incumbent has no challenger.”

“Fortunately, the candidates for these two crucial places, Ashanti and Eastern, are all known quantities from their performances and contributions in 2020 and the delegates know this. For all but one, the main candidates had served previously as chairmen, at least for several terms as either an incumbent or as constituency chairmen, and registered many key victories for the NPP over the period. They have records to stand on,” he added.

In the Ashanti Region, the main contenders for the chairmanship position are incumbent chairman, Bernard Antwi-Boasiako, popularly known as Chairman Wontumi, and former Dean of Constituency Chairmen, Odeneho Kwaku Appiah.

A Senior Research Fellow and Director of Research at the Kumasi Technical University (KTU), Smart Sarpong, has predicted a win for Mr Boasiako. He stated that the research data points to a 57.8 percent victory for Mr Boasiako, against 36.5 percent for Chairman Odeneho Kwaku Appiah and 6.2 percent for the other candidates. Mr Bosiako, who believes the research is a reflection of the people’s will, has stated that he was positive delegates have never failed him and will not fail him this time.

“I strongly believe that one good turn deserves another. Since the delegates know who I am and what I’m capable of doing, they will push me to the top again. And we shall surely build an enviable team to face the opposition NDC, not just come 2024 but anytime and any day,” he told the Daily Statesman reporter, Benedicta Akplor.

However, Mr Odeneho Appiah insists he has what it takes to take the region to ‘the promised land.’ Addressing a press conference in Kumasi on Wednesday, he stated that he will administer the party at the regional level to adopt a bottom-up approach to decision-making when given the nod.

“I will create the environment where most of the decisions of the party would be from the grassroots, rather than the top-down approach, where the grassroots felt detached from the party structures,” he indicated.

He added that he would strengthen the structures of the party and build the capacity of the youth and women wings of the party to enable them to work effectively and in unison to help break the eight.

In the Eastern Region, the party’s chairmanship contest is between the party’s Regional Secretary, Jeff Konadu Addo, and Kwadwo Boateng-Agyemang, a former Dean of Constituency Chairmen.

Daily Statesman’s Mudasiru Abdul Yakeen reports that delegates from 32 constituencies, out of the 33 in the region, will be voting on Saturday, due to a court injunction on the Akuapem North constituency election.

As of the time of filing this report, both Suhum and Nkawkaw constituencies were also having challenges with their appointed executives. However, the party’s election committee has assured that the issues would be rectified before the election. The party’s Regional First Vice-Chairman and member of the election committee, Alhaji Umar Bodinga, has also given the assurance that all necessary arrangements had been put in place to ensure an incident-free election.

Mr Otchere-Darko believes the leaders elected in these two regions would be crucial for the party’s 2024 chances.

“2024 will be like 2008, an extraordinary contest by the NPP to attempt to cross the two-term barrier, which no party in Ghana has so far achieved. It is the more reason why what happens in the regional elections, this weekend, more so in Ashanti Region (Friday) and Eastern Region (Saturday), is extremely vital,” he said.

In the Bono Region, Richard Kofi Boahen reports that over 500 delegates, observers, and party faithful are expected to converge at the Pastoral Center in Sunyani on Sunday, May 29, for the elections.

At the time of filing this report, there was no sign at the venue of the programme but sources say most of the preparatory works, ahead of the big event, had been done. During a visit to the venue, some supporters of the aspiring regional executives were seen pasting posters of their preferred contestants. Bono Regional Minister, Justina Owusu-Banahene, has given assurance that adequate security arrangements are being put in place to secure the place against any possible breach of peace.

Ten out of the 12 constituencies will take part in the voting process. However, Sunyani East and Jaman South will not be able to participate in the congress, due to court injunctions.

Ahead of the election, there have been accusations and counter-accusations from supporters of the Regional Chairman, Kwame Baffoe Abronye, and his main contender, Konlaabig Rasheed. Supporters of Abronye claim that the opposition National Democratic Congress (NDC) is desperately working around the clock to unseat him, in favour of his opponent.

Meanwhile, Mr Otchere-Darko maintains that the party’s ability to break the eight years governance cycle would depend on what happens in the regional election.

“For the NPP to cross the Big 8, a few fundamental things must be in place (starting this weekend):

(1) All the regions, Ashanti and Eastern Regions, in particular, being the biggest support pools of the NPP, must have strong, united and competent leadership that has the confidence of both the grassroots and the top hierarchy of the Elephant.

(2) The government must first be seen as to have delivered (even under these challenging circumstances and there is surely time to turn things around).

(3) The presidency and the presidential candidate must be fully aligned.

(4) Finally, present a presidential candidate who has the confidence and eloquence to defend the NPP record, give as much as he/she can take and present a vision that builds on the gains so far chalked, and the courage to admit what needs to be fixed, and the integrity to inspire the majority of Ghanaians,” he said.