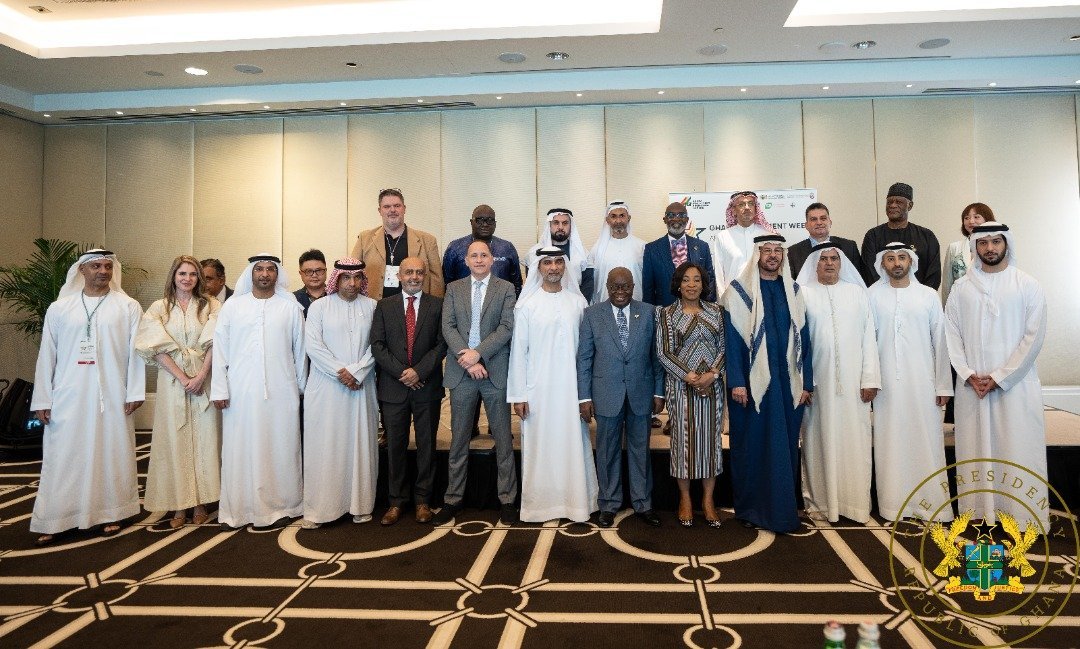 President Nana Addo Dankwa Akufo-Addo has urged the private sector and investors in the United Arab Emirates to make Ghana their first port of call when venturing into the West African region for business.

He made the call during the UAE-Ghana Business Forum yesterday on the sidelines of the Abu Dhabi Sustainability Week.

The President recounted that government, since 2017, had put in place measures aimed at reducing the cost of doing business, and improving the business environment.

According to the President, these measures “made the Ghanaian economy not only one of the most business-friendly economies in Africa, but also one of the fastest growing economies in the world between 2017 and 2020, averaging 7% GDP annual rates of growth, up from the 3.4% rate we inherited in 2016.”

He gave the assurance that Government is working to restore the nation onto the path of high growth rates experienced prior to the onset of COVID-19 and the Russian/Ukraine.

President Akufo-Addo noted that Ghana’s decision to seek the collaboration of the IMF is “to repair, in the short run, the country’s public finances, and give credibility to balance of payments, which have taken a severe hit in very recent times as a result of these developments.”

He expressed the hope that the country would emerge from this with a stronger and more resilient economy, and advance towards its goal of reaching a Ghana Beyond Aid.

“Not only is Ghana the best place for doing business in West Africa, but she is also the preferred destination for a perfect blend of mineral resource potential, stable regulatory environment, favourable fiscal regime, and socially responsive mining in Africa,” he added.

Describing mining as a key pillar of Ghana’s economy, the President said gold is the most commercially exploited mineral in Ghana, accounting for more than 90 percent of the country’s mineral revenue.

The President disclosed that, more recently, Ghana had been placed globally on the map of some few countries that have made significant discoveries of lithium, “just as she has found also graphite and iron ore in significant quantities”.

According to him, Government is also working towards the net zero emission target, and collaborating with other relevant stakeholders in employing climate-friendly technologies and practices, to achieve the maximum developmental impact for the country.

He explained that his government would not only seek to exploit these minerals in their raw form to enhance export earnings. He said that would help generate value added benefits, along the full value chain of the minerals, and create linkages with other sectors of the economy.

“The potentials created offer considerable opportunities for UAE investors, who possess the capacity to generate the value-added benefits, especially through the Government’s local value-addition and processing drive, to partner Ghanaian companies in converting their natural comparative advantage into an enhanced, more valuable, sustainable and competitive advantage,” the President added.

He assured that the standards for responsible environmental and social stewardship, maintained by Ghana’s minerals and mining sector, is comparable to any found in the best of mining jurisdictions.

The President stressed that “the Minerals and Mining Act of 2006 (Act 703), supported by the Regulations passed in 2012, along with a few amendments and introductions that have been made, have stood the test of time”.

Despite the current economic challenges, President Akufo-Addo maintained that “it is an exciting time to be in Ghana, and do business in the country”.

He urged the private sector in the UAE to take advantage of the business-friendly climate in the country to invest in Ghana.

“Regardless of where you choose to invest in Ghana, Government has instituted a number of fiscal incentives for the investor, depending on the nature of the activity or the location of the investment,” the President indicated.

He also touted Ghana as a beacon of democracy and stability in Africa, with a modern democratic system of governance, with an independent Judiciary and a strong attachment to the rule of law.

“In the same vein, we are determined to make Ghana an example of rapid economic growth within the context of a well-developed market economy. We welcome greatly your contribution to this endeavour,” the President stated.